On Wednesday I woke up feeling….tired.  I just needed a nap.  BUT I had way too much to do for that to happen.  I was behind on laundry.  The house was a mess, and the boys were unusually disobedient.  And then I realized we were out of milk, because Nathanael has suddenly developed an obsession with drinking “mooook” and needs soooo many cups per day.  And  we needed it for dinner.  My normal shopping day is Thursday, and since the store is a 22 minute drive one way, I didn’t want to go 2 days in a row.  So, I set out to do next week’s meal planning and shopping list a day early.  Once I had that finished I headed to the store and did all my shopping.

I got home and went back to attacking my consignment sale items that needed to be entered by Friday.  I delayed on the laundry and cleaning, but at around 4:00 I was pumped to start dinner.  On the meal plan was chicken and dumplings–my absolute favorite!  All through the day, whenever I felt stressed I would just tell myself, “It’s okay because I get to eat chicken and dumplings tonight!”

I hadn’t attempted chicken and dumplings in over FOUR years, after failing miserably at them when I was a newlywed.  Now, I wasn’t even worried about them.  I’ve gotten so much better at cooking meals over the last couple of years, and I figured I’d be able to handle it–no problem.  Or so I thought.  I started the chicken, and then the potatoes that would be a side.  When the chicken finished, I pulled it from the broth, used a little broth to make the dumplings, and then thickened the broth up.  So far, so good.  And then I started dropping the dumplings in.  I dropped 7-8 into the pot, and then lost them.  Like….they disappeared and were magically absorbed into the broth.  I couldn’t find them in there anywhere!  The broth became so thick it wasn’t even usable.

As I gave up and just left the kitchen, I had used half a gallon of milk, half a bag of self-rising flour, all the broth from cooking the chicken, and half of a store-bought container of broth.  I had failed, again.  Even more miserably than the last time.  I cried.  I texted my husband big long teary text-messages, and he came home and saved the day.

He came home, dumped my disaster into the trash, and then made chicken and dumplings from start to finish.  Because unlike me, he CAN make them.  I have no idea why I can’t, and HE can.  But I’m just going to go with being thankful that he saved the day, because otherwise I’ll just feel pathetic.

We barely had time to eat dinner, get ready, and get to church.  I was 5 minutes late for church, and I was supposed to be teaching the preschool class.  Sigh.  What a LOVELY day.

After church I needed to come home and clean the mess of a kitchen, but I just. didn’t. feel. like it.  I turned on a TV show, and laid on the couch for 2 hours.  We didn’t put the boys to bed until after 10:00.  And then I looked at the kitchen.  I felt paralyzed.  I did NOT want to even touch it.  Couldn’t I just go to sleep and leave it for tomorrow?

I could.  I knew I could.  But then I looked at my “Shiny Sink” reminder sign and felt a twinge of guilt.  I remembered something a friend had sent me that came from the Fly Lady.

“When I procrastinate, it’s as though I am punishing the future version of me…..As though the person who will live in my body tomorrow is a totally different person.  One who either really loves doing dishes or someone I just don’t like–and therefore it’s a good idea that she have a kitchen full of 2-day-old dishes to take care of.  Amazingly, though, it was always still me that had to get up the next day and face the ugly kitchen, the dirty floor, piles of clothes, etc.”

As I reflected back to this quote, I knew that I did NOT want my Thursday to start off just as badly as my Wednesday had gone, and I decided to bless the me of tomorrow by giving “her” a clean kitchen to begin “her” day.

Left of the Stove 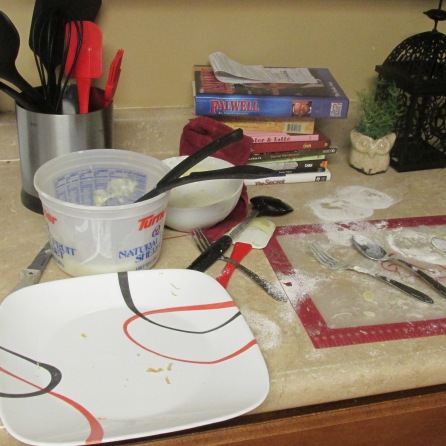 Right of the Stove

Left of the Sink

Table still has our dirty dishes on it.

Yuck.  It stresses me out to even see these pictures.  I started by putting away all the clean dishes.  Then I re-loaded the dishwasher as much as possible.  I scrubbed and rinsed the remaining dishes, and then cleaned the counters.  It sounds quick to say it like that, but it took me TWO. FULL. HOURS.

At 1:00 am I headed to bed, and my kitchen looked like this: 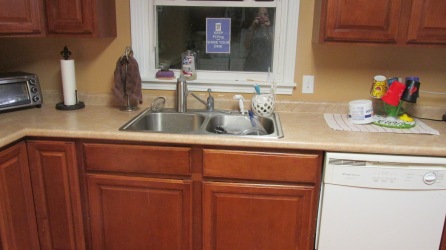 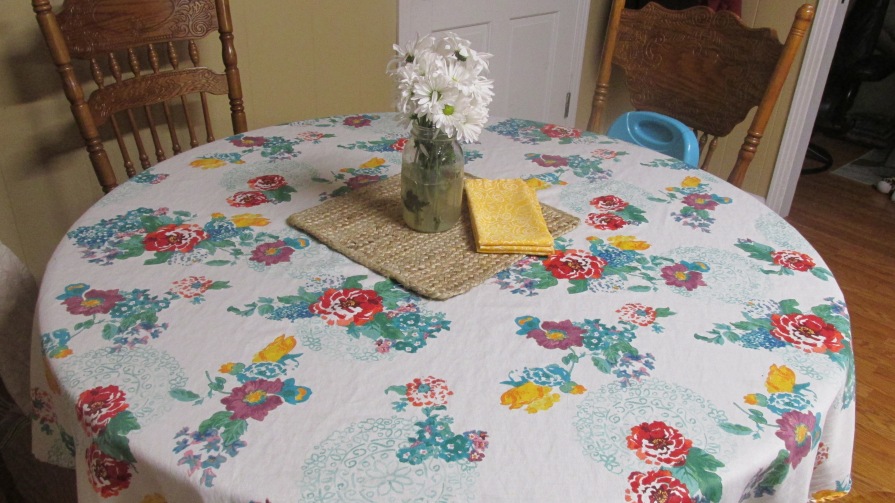 Ahhh…..  Breathe.  I literally stood in the kitchen when I finished, just breathing.  It was like for the first time all day, I felt peace.  I breathed, and then I headed to bed.  And I slept wonderfully.

And the best part?  Thursday’s version of me woke up to a house that was ready for my day.  I was busy with THAT day’s chaos, which we all know–is enough for the day.  I’m so thankful that I didn’t have Wednesday’s chaos still hanging over me.

I’m so incredibly grateful that I remembered the Fly Lady’s wisdom in that moment, and was able to bless myself with a better tomorrow, and give my family a more peaceful mother and wife.

Keep Flying and Shine Your Sink!