In the summer of 2006 I spent a summer overseas, where my roommate Megan introduced me to the first two seasons of LOST.  Back home in the U.S. I was able to watch the next 5 seasons as they aired.  Then when my husband and I were engaged, we watched the entire series again on Netflix, and actually watched it again this past fall.  It’s hard to find a show that both of us can enjoy, so when we find one, we hang on to it!

If you haven’t seen the series, I will warn you now that you might be “LOST” on this post. If that’s you, I’m sorry about the post–but you should definitely check out the show on Netflix.  Just make sure to watch it in order, and remember that the pause & rewind buttons are your greatest friends.  This is not an affiliate thing where I make money for my recommendation.  I just think you should watch it!  🙂

Anyway, in Season 4 there is an episode called “The Constant.”  In this episode, Desmond begins to suffer some unexpected side effects of the radioactivity he had been exposed to on the island.  Somehow, Desmond becomes “unstuck” in time.  His body seems to “zone out” in the present, but he–in a sense–wakes up in a previous time of his life.  In one instance he wakes up and is in the military, in 1996.  Even when he wakes back up to his present reality, he has no memory of anything that has happened in the 8 years since 1996.

As time goes by, these “flashes” through time begin happening more and more frequently, and begin to last much longer than you and I would expect for something called a “flash”.   While back in time, Desmond visits Daniel Faraday, a physicist who studies time and later comes to the island.  While together, they manage to impose a similar effect onto a rat, who runs a maze that Daniel Faraday was not going to teach her until later that day.  Sadly, the rat dies after enduring her flash through time.

Worried that Desmond’s brain will be unable to handle the constant flashes, Daniel tells Desmond he needs to find a “constant”–something that exists in his life in both 1996 and in the present.  Desmond, of course, chooses Penelope Widmore–the love of his life.  She becomes an anchor for his brain–the one thing that remains constant throughout the constant changes he is facing.

Though Desmond’s story is a bit far-fetched, I wonder how easily many of us would be able to find a constant.  Many of us might choose as Desmond did–a significant other.  We might also choose our parents, a home, or even a car.  For me, if I were to go back 8 years in time, I would not have even met my husband yet.  The longest I’ve ever lived in any specific town is 6 years.  My parents have always been in my life, but for 7½ of the past 13 years I have lived 10 or more hours away from them.

Of course in that sense I will probably never need to find a constant.  (Thank Goodness!)  However, what if I woke up one day and had none of the previous things I had relied on?  What if I lost my family, my home, and my church?  What, then, would be my anchor?

For many in this world I think this might be one of the hardest questions to answer.  But for a Christian?  It’s an easy answer for me.  There is only ONE constant that I KNOW I will always have.

Can you feel your heart just “settle in” a little while you read those passages?

He is steadfast forever.  He will endure.  His promises and His mercy will be here for you.  He is the ANCHOR for our souls. 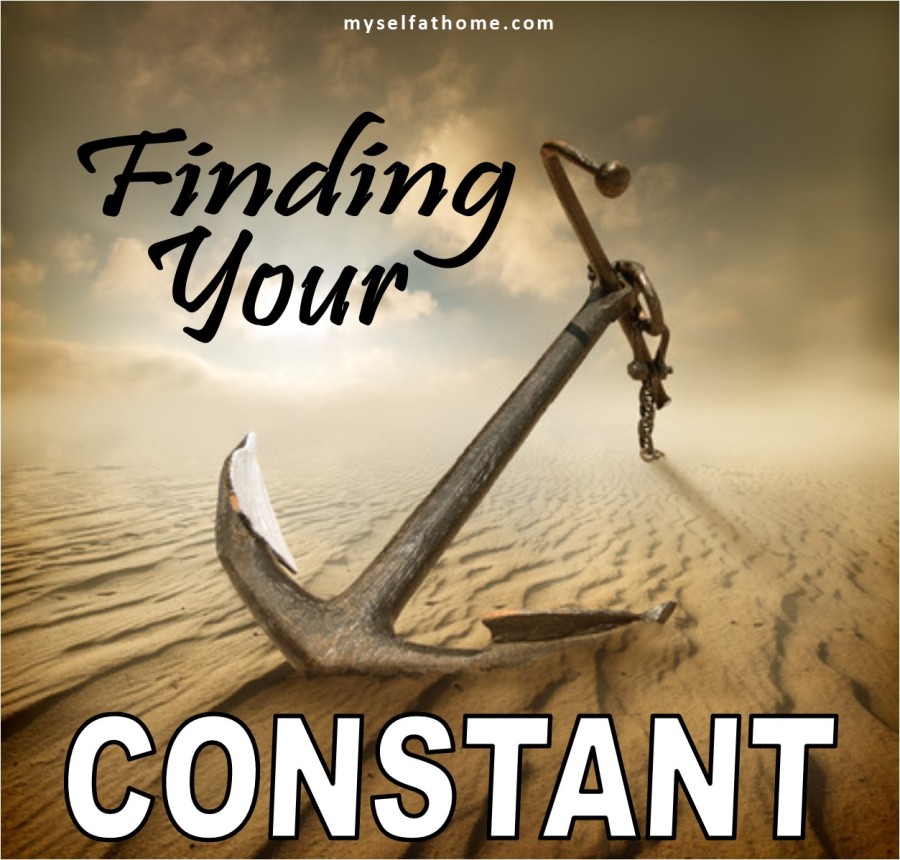 I can’t read those things without His peace flooding into my spirit.  With my eyes off of all the things I might choose to depend on, and with my eyes off all the things that I worry might fail me, I find an anchor.  I find the ONE THING that is my constant.  I lift my eyes to that one thing–to THE ONE who holds the future in His hands.

He will be here.  Come what may, He is MY CONSTANT.